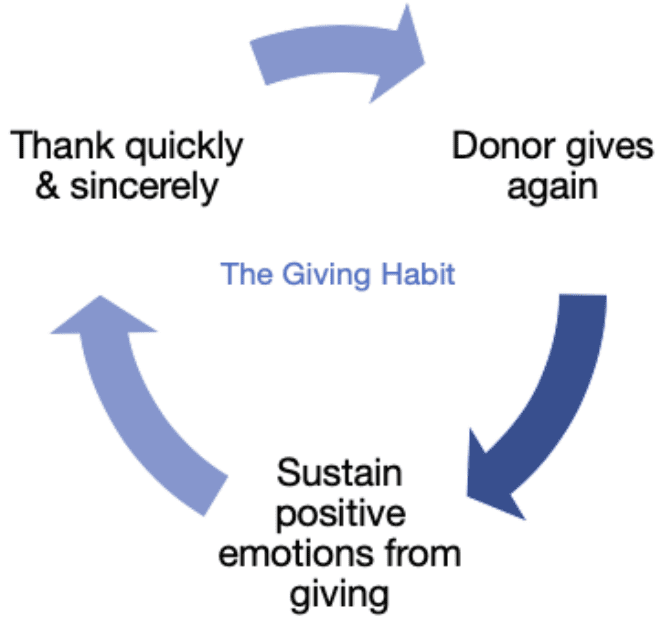 Charity Research Round Up. Issue 2

Welcome to issue two of the Bluefrog Fundraising Research Digest, our semi-regular round-up of research related to all things fundraising.

As before, if you have any research that you might like to share (we’d love to see any in-house research highlights) please drop us a line at [email protected] and we’ll be in touch to discuss how we might feature it.

Alternatively if you’d like to chat about Bluefrog running some research for you, please email [email protected] and we’ll share what we know and highlight how we could boost your income. We have experience of running research programmes in the UK, Ireland, Australia, Canada and the USA so no job is too large or small.

Does being charitable make you happier?

629 Dutch individuals were recruited to examine whether a positive mood can be sustained by pro-social behaviours. Participants were asked to complete an online diary to monitor their “feelings, behaviours, cognitions and activities”.

Three times a day over 30 days, participants were prompted by text message to rate themselves against the statement “Since the last measurement I was able to make a difference to someone”. That “difference” was up to each individual to define but included such situations as emotional support, practical help and financial support (the example cited in the paper is giving money to a homeless person).

Researchers found a reciprocal relationship between prosocial behaviour and “positive affect” in daily life, whereby helping others made participants happy and that in turn increased the willingness to help others.

An immediate implication of this study for fundraisers is perhaps to emphasise the power of thanking donors quickly and sincerely. In doing so, we sustain their positive emotions as a result of giving and consequently increase their willingness to give again. Ultimately helping to establish a giving habit.

Staying on the theme of thanking, participants in this experiment wrote letters of gratitude to someone who had touched their life in positive way and were then asked to predict how surprised, happy or awkward the recipients would feel. The senders consistently underestimated how positive the recipients felt as a result of the letters as well as how warmly they had been written. The senders also overestimated any feelings of awkwardness from the recipients.

The researchers highlight that the gap between our expectation and the actual impact of expressing thanks means that people are missing out on a “powerful act of civility” that would benefit both the thanker and thankee.

Never underestimate the impact of saying thank you to your donors!

CAF published their inaugural Wales Giving report last month.  Headlines from the research show that the Welsh are slightly more likely than the rest of the UK average to give to charity (59% versus 57% in the past year). However, donation amounts are considerably smaller – the median amount given by Welsh individuals was £15 and the mean was £36. Across the UK the median was £20 and the mean £45.

Beyond financial donations, 67% report to have taken part in a charitable activity in the past four weeks, compared to 64% across the UK.

Welsh donors indicate a mild preference for cash and raffle/lottery tickets and appear to be slightly less fond of regular gifts than the rest of the UK.

Geography has proven to be a particularly important consideration for the Welsh fundraising market. Over a tenth of legacy income from Welsh donors goes to medium and small charities compared to 1% of charities headquartered in England and 0.2% in Scotland. Many of these are in the Welsh health sector which received 77% of Welsh legacy income, compared to a 42% market share across the UK.

Are ethical consumption and charitable giving substitutes or not?

Although a few years old, this is a current area of interest at Bluefrog. We will be conducting our own research into this area in the next couple of months. We’ll share our findings as soon as we can.

This research was conducted with German consumers. However, it is reasonable to hypothesise that the findings could be applicable to other similar markets. The author states that whilst there has been a growth in consumer spending on ethical products, donations to charity have stagnated (note: in the UK, in spite of significant growth in ethical spending, giving has remained at approximately £10bn a year – outside of disasters).

She seeks to establish whether the increased consumption of ethical goods has occurred at the expense of donations to charity. Ethical goods are classified as Fair-trade, organic certified or Cause-related marketing products (where the company makes a charitable gift following the purchase of their product).

Specifically regarding donations to charity, one group of consumers (27% of the sample group) were identified that were likely to divert charitable giving towards ethical spending as their way of “doing good”.

Our study aims to identify if this is an important issue for British donors when managing their giving portfolios.

What does the public think about fundraising?

The IOF has just published the first installment of its research into public perceptions of fundraising.

78% of the general population thought that raising funds for charity was an important thing.

In light of the press coverage that charities receive in certain corners of the British media, it might be a surprise to see that just 18% of the sample saw fundraisers in a negative light.

Perhaps that is because 83% of respondents reported not to have recently seen, read or heard something about the fundraising profession. Of the 7% who had, 55% had heard something positive and 26% something negative.

The truth might be that though charities (and fundraisers) are valued by donors, they have more important thing in their lives than spend too much time worry about what we get up to?

Much more is available in the full report